VIAREGGIO.Athletics and Versilia formed another significant binomial name in Mexico City in 1968, in the Games marked by the famous Black Panthers salute by sprinters John Carlos and Tommie Smith. Italy qualified for the final in the 4 x 400 metres relay, later won by the Americans with the new world record. The Azzurri listed also Viareggio-originated Giacomo Puosi, regarded as one of the fastest sprinters in Italy at the turn of the 1970s. He also competed, with less fortune, in Munich in 1972.

History has told us that Versilia has excelled at the Olympics in track and field but also shooting. This tradition was reinforced in 1984, as Roberto Vannozzi took part in the Los Angeles Games, boycotted by the Soviet Union in response to the Americans who failed to attend in Moscow four years earlier. Runner-up at the World Championships in Seoul, he got the 11th place in the rapid-fire pistol from 25 metres. Nowadays, he runs the famous “Bar Galliano”, a café on the elegant Viareggio esplanade opened by his family in 1932.

The last decade of the 20th century was marked by two particular presences of athletes from Versilia. In the 1992 edition in Barcelona roller hockey was introduced as a demonstrative sport, probably due to the career as a goalkeeper by then IOC chairman Juan Antonio Samaranch. Italy, one of the countries with the oldest traditions in this sport alongside Portugal, Spain and their former colonies, took part with a decent team that succeeded to step on the podium. Among the bronze medallists there were goalkeeper Alessandro Cupisti and Roberto Crudeli, born respectively in Viareggio and Forte dei Marmi, as well as brothers Massimo and Enrico Mariotti, CGC Viareggio manager and player in recent years. The delegation also included team manager Claudio Bicicchi, referee Mario Del Carlo and doctor Angelo Pizzi. 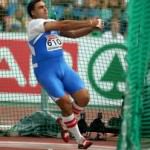 e year, Viareggio-originated Mario Salani participated in the mixed two-person keelboat in sailing with Roberto Benamati. Their final ranking was 16th out of 26 entrants.

The new millennium coincided with the rise of Nicola Vizzoni in hammer throwing at Sydney 2000. The giant from the town of Pietrasanta, nicknamed “Little Athens” for the massive presence of artists and sculptors, missed the gold medal for a matter of centimetres, but his silver is definitely shining. In the same edition Silvia Gemignani placed herself in the first 20 positions in triathlon, introduced at the Olympics from that year, whereas Margherita Zalaffi, born in Siena but relocated in Viareggio, ended her extraordinary career in fencing.

Vizzoni and Gemignani performed in Athens, too. This time they were accompanied by Viareggio-born rower Nicola Moriconi, who competed in the B Final in the men’s lightweight double sculls with Elia Luini. Vizzoni eventually participated in Beijing, where Versilia was represented also by Eugenio Amore in beach volleyball. Born in Bologna, he now lives in Torre del Lago, a neighbourhood of Viareggio renowned for the opera festival dedicated to the memory of composer Giacomo Puccini.

This is the list of all athletes from Versilia who took part in the Olympic Games. However, it is still incomplete. Not to be forgotten is ex referee Pierluigi Collina who, just like Amore, was born in Bologna and subsequently moved to Viareggio where he lives with his family. He had the privilege of being the protagonist of one of the greatest upsets in football history, the gold medal won by Nigeria at Atlanta 1996.

Giampiero Pardini from Camaiore deserves the final mention. He opened his own company of sports weapons in 1975 and five years later he began to provide pistols for Olympic national team. Apart from Roberto Di Donna, who won the gold medal in Atlanta after a dramatic final, he has always dealt with foreign federations such as China, India, Korea and, above all, Germany, the world’s first producer of sports weapons. The most shocking case came in 2004, when Ralf Schumann, nicknamed the “Kaiser”, won his second consecutive gold medal shooting with a gun produced in Camaiore. German media immediately made a comparison between Pardini Armi and Formula 1 team Ferrari, for Michael Schumacher was still the pilot of the Cavallino Rampante.

Now it’s time for Carli, Tesconi and Vizzoni to add other intriguing chapters to this epic story.